“The reawakening of Jewish life in Germany is a big opportunity for the development of culture and education and for building character in people, in generations. Nazis – and anti-Semites in general – need to loose [influence] worldwide. This can only be successful when all others foster and recognize Jewish life as an integral part of their society. The rabbi Leo Baeck could not have made an assessment different from the one he made at the time. But he would be the one most pleased if now, after many decades, the opposite were proven to be true at last. Worldwide, every human being needs to finally understand that neither gender nor religion, nor skin colour, nor nationality, nor citizenship or sexual orientation of a person is pivotal but above all: his character.”

“Central Jewish values, such as the aspiration to make the world a little better every day (Tikkun Olam), justice (Tzedek), and charity (Gemilut Chassadim), are also the basis for social coexistence in our society.”

“Jewish life is increasingly becoming normalized in Germany and is orienting itself towards the future.”

“The whole country [stands] alongside its Jewish citizens. We are grateful that, after the Shoah*, so many Jews want to live here again. This is by no means self-evident.  But many, such as Charlotte Knobloch**, have explained why they want this: because Germany has developed into an open, tolerant, democratic country. This, and nothing less, needs to be defended.”

** President of the Israelite Cultural Community of Munich and Upper Bavaria 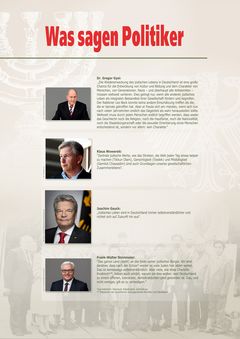