“Today, we are celebrating the new growth of Jewish life in Europe.”

“Non-Jewish Germans essentially show only a peripheral interest in Jewish people. If you ask people in Germany today: How many Jews are there? Some say: ‘There are no Jews in Germany’, and yet others estimate the number of Jews to as high as one million.”

“We have the same history but not the same stories. Although all of them are German stories.”

In the summer of 1990, a rumour spread around Moscow: Honecker is admitting Jews from the Soviet Union, as some kind of compensation for the fact that the GDR never contributed to the German payments for Israel… It got around quickly; everybody was in the know, other than Honecker maybe.

“What Jewish religion represents, I only learned in Germany. The awareness of being a Jew was always there.”

Even an extremely unworthy opinion
Will cloud the heads like bad wine:
When there are problems, it’s the Jews’ fault,
When there are none, they are to blame.

The world gets older but not wiser,
There is proof for this in heaps,
If there were no Jews to be rejected
They should to be reinvented.

We believe that Jewish life in Germany not only has a future but also is a part of the future.”

Dr. Josef Schuster (president of the Central Council of Jews in Germany) 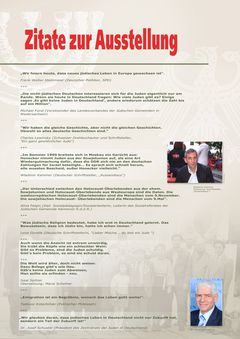