Who are we? Here you can find out something about three of the more than 200,000 “quota refugees”…

Natalia Poliakova, dentist, born and raised in the Ukraine, went to university and took her first professional steps there. Immigrated to Germany in 1996 with her husband and two young sons.

“In the beginning, it was very difficult. At that time, some people said to me: ‘With two young children, you can just sit at home’, but that is not for me. I was afraid to loose my diploma and my professional skills.

I really didn’t have any problems with the formal recognition of my diploma. But the most important task was to find and to convince an employer. It was problematic: many employers, to this day, have little confidence in non-German diplomas. A colleague from Iran told me at the time:  ‘I have this path behind me. I will help you!’ Now, I am self-employed, standing on firm ground, and feeling comfortable in Germany. At the same time, many memories, friends, the burials of my parents still connect me with my homeland.”

Maximilian Feldmann, born in Minsk in 1990, relocation to Germany in 1998.

Since 2011, student of Middle Eastern Studies at the Martin Luther University in Halle-Wittenberg and the Ben-Gurion University of the Negev in Beer-Sheva (Israel). Internship at the German Embassy in Moscow (2015).

“Germany has changed and has developed into an open and friendly country. Jewish and German identities are no longer antagonists and can complement each other without any problems, even if you are a religious Jew that is loyal to the Torah.

First and foremost, however, one should be a Jew. Integration into German society does not mean assimilation and can by no means lead away from the teachings and laws of the Torah. This also includes the avoidance of mixed marriages and relationships.

I am very proud to be a German and a Jew, and my German friends know and very much appreciate this. It is possible to be both and still not forget one’s Russian-Soviet roots.

The enthusiasm of German politicians for Jewish immigrants/migrants is however noticeably less apparent in the German population. Nonetheless, when you identify as a Jew and are proud about it, reactions from non-Jewish German citizens are quite often very positive.”

“Currently, I study international management at the University of Bochum. I am in the second semester and will soon participate in the Erasmus program in the Czech Republic. I am particularly proud that I was allowed to be the debutante at the Opera Ball in Dortmund and was part of the opening waltz.” 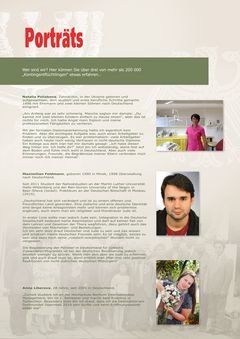