There are 108 Jewish communities in Germany with approximately 120,000 members. They are organized into the Central Council of Jews in Germany or the Union of Progressive Jews. Many of these only developed through the immigration of Russian-speaking Jews in the early 1990s.

Michael Fürst, chair of the Regional Association of Jewish Communities in Lower Saxony:

“The immigration of Jews from the former Soviet Union since 1990 signifies a stabilization of Jewish communities for the future. Without the integration of quota refugees many of the small communities would no longer exist.

Large communities, as in Berlin, Munich, Hamburg, Frankfurt, and Hannover, survived but their significance had dwindled. Of all federal states, the Jewish community in Lower Saxony is the one that exhibits the largest relative growth: from 450 members 25 years ago to 9,000 members today.

The immigration from the former Soviet Union was certainly much more difficult than the establishment of the Jewish communities in the year 1945. The communities were created by the survivors of the Shoah that had stayed here after the liberation from the concentration camps. Amongst them, the proportion of Polish Jews was quite large. They understood Judaism: they knew prayers, could speak Yiddish, and read Hebrew.

For the immigrants from the successor states of the USSR, Judaism was difficult to understand. It was therefore very challenging for the communities to integrate the immigrants into Judaism.”

Purim in the Hannover Jewish Community

The Hannover Jewish Community ranks, with 5000 members, amongst the largest communities in Germany. Its synagogue on Haeckelstraße was built in 1963. 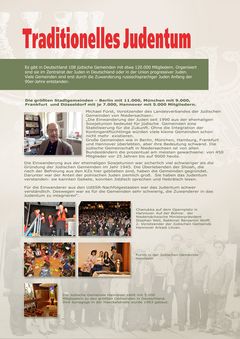