A quarter century of Jewish migration to Germany: facts, numbers, and stories.

In most countries, the term “nationality” does not describe ethnicity but citizenship.

In the USSR, this was different. Since 1932, government authorities defined Judaism not as a religion but as a nationality based on Soviet law. At age 16, children from mixed marriages could opt for one of their parents’ nationalities. The majority chose the nationality of the non-Jewish parent.

The “fifth paragraph” was a big problem for many national minorities who were often disadvantaged by the inclusion of their ethnicity in their passports. They weren’t employed or admitted to universities.

This is how the ironic expression “handicap group five” came into existence, which referred to a person with “inadequate” nationality. On the assumption that the only connection with Judaism was this notation in the passport or birth certificate, Soviet Jews were sometimes also referred to as “passport Jews”. 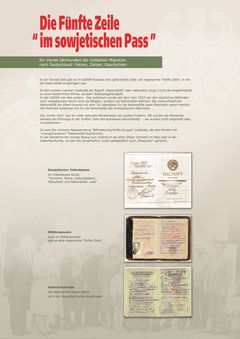