Jews have lived in Central Europe for more than 1700 years. First Jewish communities were established in the north-south corridor along the Rhine River (Cologne, Trier, Mainz, Worms, Speyer). Around 1600, approximately 10,000 Jews lived in Germany, and of these about 3000 were located in Frankfurt am Main.

In the year 1933, around 500,000 Jews lived in the Weimar Republic. During the Nazi era, approximately 400,000 Jews left the German Reich in time. About 15,000 German Jews survived the concentration camps or were able to stay alive in the underground or as a spouse of a non-Jewish person.

For a long time, it looked as if Judaism could never be a part of Germany again. It took the immigration of Jews from Eastern Europe after the fall of the Soviet Union to change everything. Today, Jewish communities in Germany have approximately 120,000 members - quadruple the number in 1989.

In many cities, new Jewish communities were established and new synagogues built. Two rabbinical colleges have opened their doors: the liberal Abraham-Geiger College in Berlin and the Orthodox Hildesheimer Rabbinical Seminary.

The total number of Jews living in Germany today is estimated at 250,000 people. 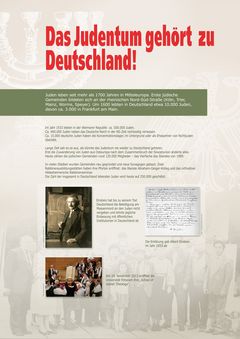