The number of Jews in the Soviet Union:

Official data does not say much about the true number of Jews in the Soviet Union because, in the census, many Jews declared their nationality as “Russian” during the Soviet era.

Out of 10,000 Soviet Jews, 315 graduated from universities and technical colleges (as compared to 182 graduates per 10,000 people in the overall Soviet average).

Despite restricted access to educational institutions in the USSR, Jews had a well above average education and professional status:

10.8% of Soviet Jews were scientists.

About 2 million Jews and their family members have left the USSR, or Russia, (for Israel, Canada, Australia, France, the USA, and Germany) in the last 25 years.

Soviet Homeland (1961-1991) by the Association of Soviet Authors (Moscow) was the only Yiddish literary magazine in the Soviet Union with a monthly circulation of 25,000 copies (9000 of which were distributed abroad). 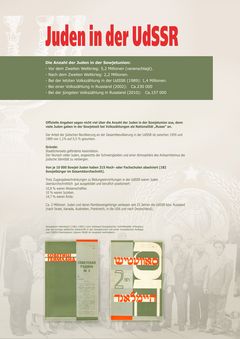