The European Janusz Korczak Academy (EJKA) is a Jewish institution that was founded in the year 2009 and is open to all segments of society. Its goal is to inwardly and outwardly strengthen the Jewish community through the transfer of knowledge, to increase its openness, and to break down the fear of contact between Jewish and non-Jewish people.

The EJKA is an educational institution that aims to fulfill Janusz Korczak’s dream. The academy promotes inquiry and, in the spirit of Janusz Korczak, wants to provide direction and enable people to have a say: Tiqqun olam, Hebrew for “repairing the world” – through education.

Working with Jewish youth from the former Soviet Union is of particular importance to the EJKA. The academy had these youth in mind when it - in collaboration with the Jewish Agency for Israel - established the “Nevatim College” in 2014. The college teaches Jewish youth and young adults the value of social entrepreneurship and assists with providing professional support for student work projects. Hence, the program does not only benefit the participating second-generation immigrants but can also strengthen Jewish communal structures in Germany for future generations.

In the international realm, the academy is developing projects in cooperation with Jewish communities and educational institutions in Belgium, France, Italy, Austria, Poland, and the United Kingdom, with a particular emphasis on partners from Israel, the states of the former Soviet Union, and the USA. 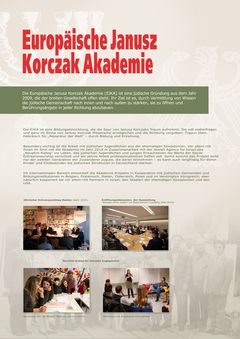