On February 8th, 1990, representatives of different parties and groups at the Central Round Table consented to the explicit appeal of the Jewish Cultural Association in Berlin which states: “For weeks, we have been hearing about threats of anti-Jewish pogroms in different Soviet cities. Remembering the fact that during the persecution and annihilation of the Jews the whole world looked on, we appeal that the German ignominy of the past be not repeated. We therefore request that the GDR lay the foundations for the immediate admission of Soviet Jews that wish to [immigrate].”

The Jerusalem Rabbi Tsevi Weinmann had brought up this request during his visit to Berlin, but the GDR foreign ministry and the Soviet embassy refused to consider the appeal. “I therefore introduced the document at the Central Round Table on February 8th, 1990, but the Modrow government ignored the unanimous decision. The requirements for this immigration were only established by the subsequent, freely elected government under Prime Minister Lothar de Maizière (CDU) between February and March 1990, authorized by the first democratically elected People’s Parliament [German: Volkskammer].”

Soviet Jews that somehow managed to get from the Soviet Union to East Berlin were eligible for an unlimited residence and work permit, health insurance, board and lodging, and pocket money. They had to prove their Jewish ancestry by December 31st, 1990, at the People’s Police or one of the admissions offices. Valid documents were a Soviet identity card or their own (their parents’) birth certificate. The GDR finance minister Romberg (SPD) mandated non-bureaucratic emergency aid for supplies and shelter. The minister of disarmament, Rainer Eppelmann (Alliance 90; German: Bündnis 90), opened the first military barracks in Ahrensfelde near Berlin. “On May 22nd, I drove to this first reception centre with the Russian-speaking Reuters correspondent Martin Nisersky. At 1:55 pm, Reuters announced in the breaking news: ‘The GDR is opening its doors to Soviet Jews’.” 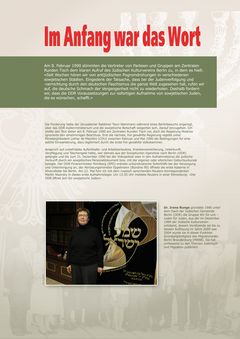